You can say that things have been better for the Lady Vols than they are right now.

They were when this team got off to the 30-1 historic start, but the last couple of weeks have been anything but that as Tennessee lost their second SEC series in as many weekends on Monday.

To pile it on, Tennessee was also run ruled in back-to-back games for the first time ever inside the friendly confines of Sherri Parker Lee Stadium.

Tennessee welcomed a hot Georgia Bulldogs team, who has one of the best lineups in the nation according to Tennessee Lady Vols softball c0-head coach Karen Weekly. 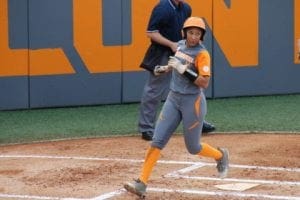 The weekend started off with a grudge match with both teams combining for five hits and three errors in Saturday’s game one.

All the action came in the bottom of the seventh when Brooke Vines recorded Tennessee’s first hit.

Then with the bases loaded, a pitch hit Meghan Gregg to bring home Vines from third and give Tennessee and starting pitcher Matty Moss the 1-0 win.

From there it was all Georgia all the time. In game two Sunday, it looked like things would be more offensive, but still close. Both Georgia and Tennessee plated runs early and the Bulldogs led 2-1 after two innings. 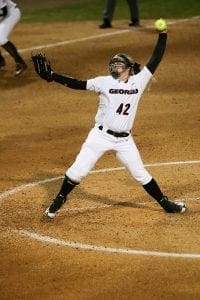 After that it got ugly quick as Georgia starter Kylie Bass let her defense work behind her and the wheels of Caylan Arnold and Gabby Sprang fell off on the way to a 9-1 run rule loss in six innings.

In the Monday rubber match, it was all Georgia start to finish as the Bulldogs took game three 8-0 in another run rule game in six innings.

Tennessee really beat themselves in game three with three errors and leaving six runners on base.

“It just seems like they were playing lights out and we just couldn’t catch a break,” Weekly said.

Honestly, she probably couldn’t be more right. Tennessee found ways all weekend to get Georgia in two out spots, then Georgia would catch fire. The Bulldogs had four two out homeruns this weekend in the series.

When it seemed as if Mary Wilson Avant, the game three starter for Georgia who also received her first win of the year, was hitting her wall of adversity and would walk one or two batters, that Bulldog defense would find a way to end the threat.

The one really moment of Tennessee showing any life on offense was in the bottom of the fifth inning. Aubrey Leach had a leadoff walk and Jenna Holcomb hit a blooper into center that if Ciara Bryan had been one step to late, it would’ve dropped for a hit.

Instead Bryan dove to make the catch and threw it in to get Leach, who was already standing at second, out at first for a double play.

Weekly even touched on the fact of the back-to-back run rules at home for the first time ever. It was made clear that those players knew the insignificance of Monday night’s game and Weekly assured the media they don’t want to make history in that way.

However, there is some good news.

With as busy as a softball schedule is, with at least four games a week most of the year, the Lady Vols will be able to move on to the next opponent quickly.

Tennessee will be back in action Tuesday night at 6 p.m. as the Lady Vols host a poor Tennessee State team at Sherri Parker Lee Stadium.

Then next weekend it’s back to the grind that is the SEC as the Lady Vols travel to the plains of Auburn for a three-game series with the Tigers.

It’s like the old saying when the going gets tough, the tough get going.