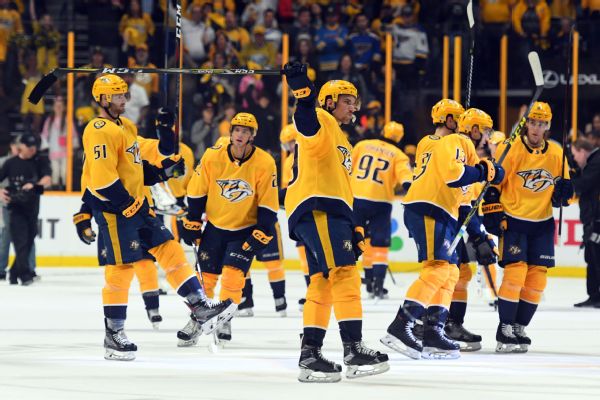 The Nashville Predators have made their way to the second round of the Stanley Cup playoffs after defeating the Colorado Avalanche in six games in the first round.

The Preds will face off against Central division foe, the Winnipeg Jets in the second round of the playoffs.

Rinne, a Vezina Trophy finalist, went 4-2 as a starter against the Avalanche, posting a .909 save percentage with one shutout.

The Jets had an easier route to the second round behind strong play from goaltender, Connor Hellebuyck.

Hellebuyck, another Vezina finalist, had a good start to his first career postseason appearance with a 4-1 record, posting a .924 save percentage while having two shutouts against the Minnesota Wild.

The Preds scoring was led by a surprise player in the first round in Austin Watson. Watson, who acts as a modern-day enforcer for Nashville, led all Predators in scoring with four goals while adding three assists and an impressive plus/minus rating of seven in the first round against Colorado.

Forward Colton Sissons also had a successful first round, notching three goals and adding four assists with a plus/minus rating of four against the Avs. Look for this duo to continue their dominance in the offensive zone against a tough Winnipeg team.

Jets defenseman, Dustin Byfuglien, had a dominant first round against the Wild, assisting on five goals while tallying 25 hits. Byfuglien is tied for Winnipeg’s lead in scoring with Mark Scheifele.

Scheifele, the Jets first line center, notched four goals and an assist with a plus/minus rating of two. Look for these two to try and continue their dominance on the ice against a strong, defensive-minded Nashville team.

Filip Forsberg is a key player for the Predators against the Jets. Forsberg is dicey on the ice; he can weave and maneuver his way around defenders to create open shots or set up teammates with clean shots. He’s a shot creating playmaker that finds holes in the defenseman and makes them pay for it. Forsberg had four goals and two assists in the first round against Colorado.

The Preds big four on the defensive side of the ice was relatively quiet in the first round against Colorado.

Commanded by Roman Josi, P.K. Subban, Mattias Ekholm and Ryan Ellis led the NHL in scoring with 203 points in the regular season by defensemen.

A Norris Trophy finalist, Subban led all Nashville defenseman with 59 points. Ekholm leads all defenseman in scoring with six points thus far in the postseason. Having defenders who can produce in the offensive zone gives Nashville a big advantage against any team they play.

Look for these four to really put their foot on the gas against a tough Winnipeg team that was second in the league with 273 goals in the regular season.

Game one is set for Friday, April 27th in Nashville with puck drop at 8 p.m. ET.