Welcome to the Rocky Top Recap, where we go through everything that happened in Tennessee athletics this week.

We’ll start on the diamond with baseball where the Volunteers split a pair of games this week to bring them to 18-13 on the season. On Tuesday, they defeated in-state opponent Belmont 9-2 at Lindsey Nelson Stadium. Benito Santiago continued his good play for the team in that game, hitting a home run and finishing the day with two RBIs. Outfielder Brandon Trammell also finished with a pair of RBIs, both of his coming off of a double that gave the Vols their first lead of the game. 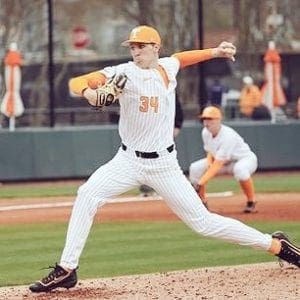 Meanwhile, on Friday, the team’s series with No. 1 ranked Florida was supposed to start but was rained out. The series then started Saturday, and the Vols were defeated 22-6. Santiago hit a home run for the second consecutive game, but the top-ranked Gators were too much for the team to handle. Games two went to extra innings, but eventually, the Gators won 6-4. The Vols did manage to steal game three 6-4.

Staying on the diamond, the softball Lady Vols played a whopping five games this week. On Sunday and Monday, the team finished it’s March 31 weekend series with No. 6 Georgia, and they lost both games at home 9-1 and 8-0, respectively. The Lady Vols were held to only five hits in Sunday’s game and four during Saturday’s. The team then rebounded with a 3-0 win at home against Tennessee State in which Caylan Arnold had a great day on the mound, striking out seven while only giving up one hit. 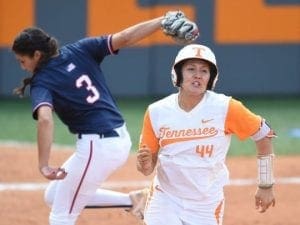 To cap off the week, the Lady Vols began their weekend series at No. 11 Auburn. The team won game one on Friday 2-1 in extra innings before being shutout in game two Saturday, losing 2-0. Chelsea Seggern’s two-out, RBI single in the top of the eighth won the first game for Tennessee, and pitcher Matty Moss picked up the win, moving to 15-2 on the season. In the final game of the series, the Lady Vols were shut out losing 6-0.

In basketball, the team was notified that JUCO transfer Chris Darrington would be leaving the team after only one season with the Vols. Darrington played in 25 games this season and averaged 2.6 points in 8.4 minutes per game. This opens up a second scholarship opening for coach Rick Barnes next season, although the team currently has no incoming players committed to join the team for the 2018-19 season.

Meanwhile, CBS Sports writer Gary Parrish ranked the team fourth in his first top-25 for next season, only behind Kansas, Duke, and Villanova and ahead of fifth place Kentucky.

Let’s move to tennis, where the No. 24 ranked men’s team lost 4-2 to No. 7 Mississippi State Sunday. This brings the Vols to 17-6 on the season and 6-3 in SEC play. Because of the loss, junior Timo Stodder fell four spots to No. 20 in the collegiate singles rankings, while freshman Adam Walton made his debut at No. 93 in the country. In doubles, the tag-team of Preston Touilatos and Luis Valero checks in at No. 25. The team returns to SEC play this Sunday against Alabama in Tuscaloosa.

Sticking with tennis, the Lady Vols tennis team rose to No. 31 in the country following its big wins against Alabama and Auburn last weekend, and Kaitlin Staines was named SEC Freshman of the Week due to her efforts in those two matches. Despite this, the team lost both of its competitions this week, losing 4-2 to Mississippi State in Starkville Thursday and 4-0 against No. 9 Ole Miss in Oxford Saturday.

It was a great week for the Tennessee Swimming and Diving team, as multiple members of the team picked up accolades around the world. Junior Colin Zeng was named SEC Diver of the year after his record-setting NCAA championship performance last month.

Coach Dave Parrington was named SEC Diving Coach of the Year for the 14th time. In swimming, Tennessee student and Olympian Kira Toussaint broke the Netherlands’ 100m backstroke record, becoming the first Dutch woman to swim a time under 60 seconds in the event. And in the Commonwealth Games, Ryan Coetzee received the bronze medal in the 50m fly event, representing his country of South Africa.

We’ll finish things off today with golf, where the women’s golf team wrapped up their regular season with a 7th place finish in the Bryan National Collegiate tournament Saturday. The team was led by senior Anna Newell and freshman Waverly Whiston, who finished 16th and 21st in the tournament respectively. The men’s golf team did not have a tournament this week, but senior Lorenzo Scalise was named SEC Golfer of the Week after finishing second in last week’s 3M Augusta Invitational.